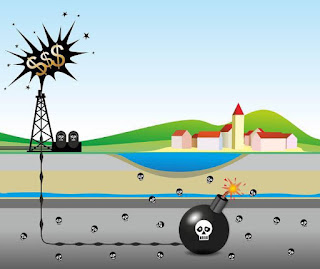 Yesterday the Bullingdon club and associates (parliament) voted through a change in legislation to allow hydraulic fracturing (fracking) to take place underneath our National Parks and Areas of Outstanding National Beauty. This vote is happened though a governmental back door that allows it to happen without having to have a debate in the Commons.

It allows the construction of fracking wells on the border of our National Parks and AONBs. These wells are the size of a cricket pitch and will be able do drill under our Parks and ...AONBs.

A typical fracking well will use around 300,000 gallons of water a day. All this water must be delivered by lorry, and waste water taken away.

If a lorry holds 10,000 gallons of water then each well will require 60 lorry visits per day, 24/7.
All this is happening on the borders of our National Parks and AONBs, whilst they drill underneath. Fracking stations run 24 hours a day.

Environmentally fracking is a complete and total disaster. The amount of gas we will get from it is even unlikely to drive the price down as it is a relatively modest amount compared to the scale of the gas market. Add to this the fact that UK taxpayers will have pay to clean up any pollution caused by fracking if the companies go bankrupt, after a proposal to make UK operators take out insurance against such damage was ruled out by the government

Rob Cunningham, head of water policy at the RSPB, said: "The prime minister promised one of the most stringent regulatory regimes for fracking in the world but his government appears more interested in tax cuts than managing risk. It really doesn't matter if you are pro or anti fracking, this proposal would simply ensure that when things do go wrong shareholders, not taxpayers bear the cost for cleanup if companies go bust or cease trading. If government's response boils down to concerns over cost of insurance it sheds an interesting light on just how safe they really think the technology is."

Why are we allowing this to happen? Is this the legacy you want to leave to your children or grandchildren? 1000s of fracking wells with 10s of 1000s of lorries driving around our countryside 24/7.

As the government reduces spending on renewables to the lowest levels for years and announces it is "kick starting" the fracking industry the future looks very bleak indeed, and this from 'the greenest government ever? Liz Truss and David Cameron are the most dangerously misguided and greedy pair this country has seen in many years. In a time when we are meant to be moving forward and getting away from fossil fuels, this seems the most ludicrous backwards step yet!

"We should have a moratorium on fracking in Britain until we can be sure it is safe and won’t present intolerable risks to our environment. Neither MPs or the public have received these assurances yet Ministers are ignoring people’s legitimate concerns and imposing fracking on communities.”

“It is frankly shabby of the Government to sneak through these weak fracking rules without any proper Parliamentary debate. Ministers had previously conceded that there should be the tougher safeguards that Labour has been calling for to protect drinking water sources and sensitive parts of our countryside like National Parks. Now they’ve abandoned those promises'

“Government successfully sneak through (without debate) change to allow fracking under protected areas. Real shame 298 MPs voted for it.”

“Majority cut to 37 as Tories push through fracking in National Parks with no debate, breaking promise & treating Commons with contempt”

“The Trust stands by its call for the Government to rule out fracking in the most sensitive areas – protected wildlife areas, nature reserves and national parks – and make them frack-free zones. There is a need to ensure that regulations offer sufficient protection to our treasured natural and historic environment.”
“There is an urgent need for more evidence about the impact of fracking on the hydrology, ecology and geology of landscapes. This is needed for informed decision-making about any future for fracking in the UK.”
Posted by JamesRCutting at 04:10